Who is, or is not, related to the Maximoff twins is a matter of dates, but for a time Robert Frank, Jr. was believed to be Wanda and Pietro's eldest brother. Son of the Invaders' Whizzer and Miss America, Bob Frank was born a dangerous radioactive mutant due to exposure suffered by his parents. Placed in suspended animation for decades, he awoke to face the Avengers with a radioactively powerful adult body, but the mind of an infant. Nuklo was eventually educated and integrated into society, but his intermittent nuclear powers have caused him to struggle to fit in.
https://mightyavengers.net/characters/nuklo 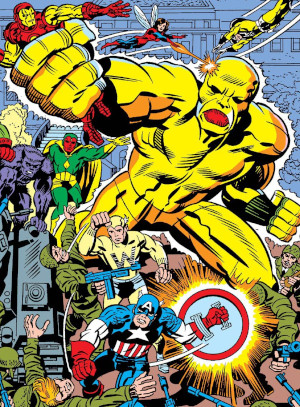