Spotlight On... WHITE QUEEN I!

Spotlight On... WHITE QUEEN I!

Fifteen years in the making, we finally update the Spotlight on the White Queen for the first time since 2005! And, um, Emma's been busy, you guys. Growing from a novel inclusion to the roster by Grant Morrison, Emma Frost became a leadership figure among the X-Men after the death of Jean Grey and retirement of Charles Xavier. She co-captained the team through the Decimation and Utopia, the Dark Reign, and the return of the Phoenix. Emotionally shattered for a time because of the death of Cyclops, Emma flirted with villainy again, but has renewed her ties to the X-Men in the Dawn of X era. Perhaps most important has been the progression of her relationships with former arch-rivals Storm and Kate Pryde. These former foes have come to accept Emma's change of heart, and the X-Men as a whole have become stronger for it. While the X-Men still know better than to cross Emma Frost, they are now comfortable knowing she's on their side... most of the time. 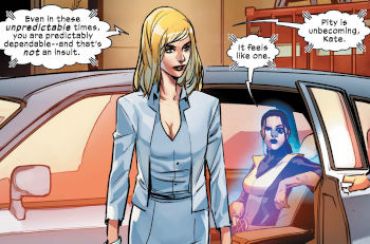 Re: Spotlight On... WHITE QUEEN I!

Thanks for the great update. Hope you all enjoyed the holiday season.

I was wondering why you guys hadn't posted anything for so long, but I see you're starting the New Year off with a bang.
Current Pull List
Hickman's X-men, Runaways, Champions
Top
Post Reply
2 posts • Page 1 of 1