When he was taken over by the Deathseed, Archangel ensured the legacy of the Clan Akkaba by conceiving children with Pestilence of the Final Horsemen. The twins Uriel and Eimin were destined to become major players and constantly thwart the schemes of Kang the Conqueror to overcome the mutant race. Consequently, Kang instead kidnapped the twins at birth and raised them as pawns in his master plan of conquest. Believing they were cunning enough to outwit the Conqueror, the Apocalypse Twins discovered too late why Kang is one of the greatest villains of any timeline. 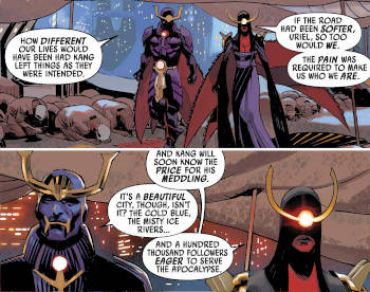 Re: Spotlight on... APOCALYPSE TWINS!

These two were fairly interesting and complex villains. Hopefully another writer brings them back one day. I wonder if they would be a good foil to the Arakkoans.
Current Pull List
Hickman's X-men, Runaways, Champions
Top
Post Reply
2 posts • Page 1 of 1