A strange and powerful alien wanting to play a game with lesser mortals is a staple of sci-fi narratives. The Grandmaster is the Avengers' version of this trope, an Elder of the Universe who has dedicated his immortal existence to games of chance, skill and competition. He rarely battles the Avengers directly, but rather manipulates them into serving as players in one of his Games of the Galaxies against another threat. Dedicated to fair play only in the most technical of senses, Grandmaster has no qualms about stacking the deck in his favor for matches. Immensely powerful, Grandmaster can literally kill with a wave of his hand. Instead, he is frequently undone by his own gambling addiction and fear of being seen as a loser. Heroes as varied as Hawkeye, Daredevil and Living Lightning have won back the fate of the Earth several times by beating Grandmaster at his own game. Today's winner of a Spotlight covers the one who lives to win... the Grandmaster! 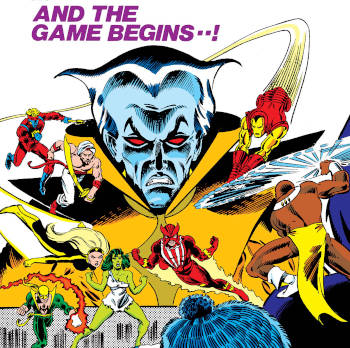 Re: Spotlight on... GRANDMASTER

Re: Spotlight on... GRANDMASTER

Finally got around to reading this one, great to learn about characters that I know very little about.
No mention of his memorable/bizarre appearance in X-Men: To Serve and Protect #4 though