Wiccan of the Young Avengers has a history that defies belief. Born the improbable child of a witch and a synthezoid, conjured through the magic of an entire town of witches and anchor by the soul of the Devil himself, the original William ceased to exist only to be reincarnated as a transmigrated soul in the body of Billy Kaplan.

Once you get past his origins, though, Wiccan is much easier to understand -- he's just a reality warping teenager whose powers present like magic but actually come from the Demiurge, the sentient biosphere of the entire planet that is also Billy's future incarnation, whose influence on magic will echo forward and backwards in time once he claims his birthright. Oh, and he's engaged to a half-Kree and half-Skrull hero destined to unite the warring races even to the detriment of his adopted homeworld, Earth. But that probably won't be a problem, right?

Before EMPYRE, read our Spotlight today on Billy Kaplan, beloved of Dorrek VIII, the Asgardian, the Demiurge... WICCAN. 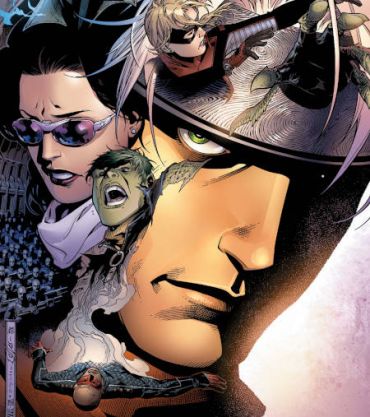 A backstory right up Monolith's alley.

Yay, somebody with a more complicated backstory than Psylocke.
"You can leave your valuables here
with me," he smiled.
Top

Billy is a lot like a philosophy riddle that unravels the closer you look at it. Even basic questions, like...

Is he a mutant?
…Well, does he have the X-Gene?
……He's a half-imaginary spirit form whose Y chromosome came from [*FILE NOT FOUND*], so...Does he even HAVE genes?
"If you want to tell people the truth, make them laugh, otherwise they'll kill you." -- Oscar Wilde
Top

I did quite like the last page of the article in particular.

Just a quick question on that - in the biography Wonder Man (and his mother) are referred to as the twin's uncle / grandmother, but don't appear as such in the family section of the vital stats - was this just because the 'brother' relationship between Simon / Viz adds more complexity than needed (and what already exists)?
X-Editorial:viewtopic.php?f=13&t=8412&p=177877#p177877
Thunderbolts:viewtopic.php?f=14&t=8802&p=186403#p186403
Top

Right, the extended family of reincarnated souls seemed too far outside the bounds here, especially once we got into the purely titular relationships on Vision's side of the family. Unstoppable Wasp did a bit about this how Billy and Viv Vision are half-siblings from a certain angle, and Nadia is Billy's great-aunt...but that way just lies madness.

It's a little like when people ask if Cable and Ruby Summers are half-siblings. And, yeah, technically...but they've never met or been in the same timeline at the same time, so it's not something to really explore yet.
"If you want to tell people the truth, make them laugh, otherwise they'll kill you." -- Oscar Wilde
Top

Haha I love how there needs to be an arbitrary line of where things start drifting from comics pseudo science to sheer nuts. I don't disagree but there's all sorts of weird tangents for Viz (like is Victor Mancha his brother etc.?). I must have missed the Vision spotlight but this article has prompted me to re-read that over the weekend.
X-Editorial:viewtopic.php?f=13&t=8412&p=177877#p177877
Thunderbolts:viewtopic.php?f=14&t=8802&p=186403#p186403
Top
Post Reply
8 posts • Page 1 of 1