Want to invite new players to your role-playing/ Draft / Betrayal game?Needing help starting one? want to join one? This is the place to talk and participate
Post Reply
63 posts

I like it that so many players choose Sharon Ventura. She will always be Ms. Marvel for me.
Top

Lol - I do like Sharon Ventura/Ms. Marvel as a character, but I also only chose her for my team C because Wade took Thundra before I could.

As a character I like Sharon definitely better than Thundra, but she would have been a better fit for the team.
[PL_2.0]
Top

I would have loved to see her being written under Hickmann. Ever since I saw her in some old FF issues in the 80s, I developed a strong interest in her character.

Always liked her much more than Medusa, Crystal, Lyja and Alicia.
Top

You guys are killing me. After already revoking my theme for Team D twice, I had set my eyes on either Ant-Man or Flux as the fourth member…. and guess who Omnicon and Folklore picked.

EDIT: Okay - the Draft is done. All rosters are picked. Here's the idea and some image work for my first two groups, I'll do the other two tomorrow.

Four Nations
Black Bolt, Black Panther, Namorita, Silver Sable
In the wake of Krakoa being recognized as a sovereign state, the political powers have been shifting. The mutants have alienated friends and foes alike, and some of their former allies wonder what Krakoa's rise to power will means for their own people. The nations of Wakanda, Symkaria, Atlantis and Attilan decide to form an alliance, and the four regents meet regularly to coordinate their efforts. There'll be espionage, illegal deals, red tape and back-stabbing. Namor chose not to take the Atlantean seat on the council himself, as the others are suspicious of him because he is a mutant.
(Actually I wanted Namor on this and Medusa, but they were taken by others. However, I'm very happy with the outcome) 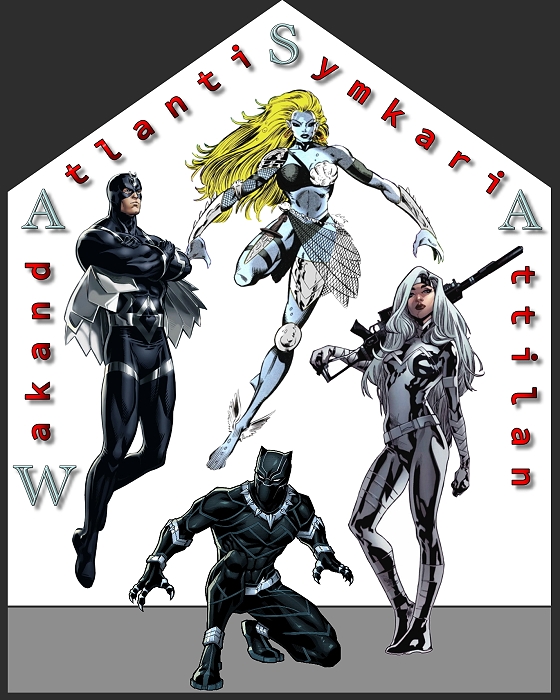 Fantastic Four
Thing, Invisible Woman, Lyja, Human Flame (Frankie Raye)
This is the hero team operating out of the base at 4 Yancy Street; while the other teams are all following their respective tasks, someone needs to hold the fort and deal with super-villain attacks, whether it's in New York City or elsewhere like the Mole Man causing trouble again on Monster Island.
(The idea here was to have all the FF's powers represented, but not neccessarily by themselves. I definitely didn't want Reed here, as he is more of a scientist than a hero. Lyja's shapeshifting made a good replacement. Ben & Sue were surprisingly still available, and then I used Frankie Raye in the final spot as Crystal wasn't around anymore. Frankie is powered down to Torch-level powers and not cosmic Nova) 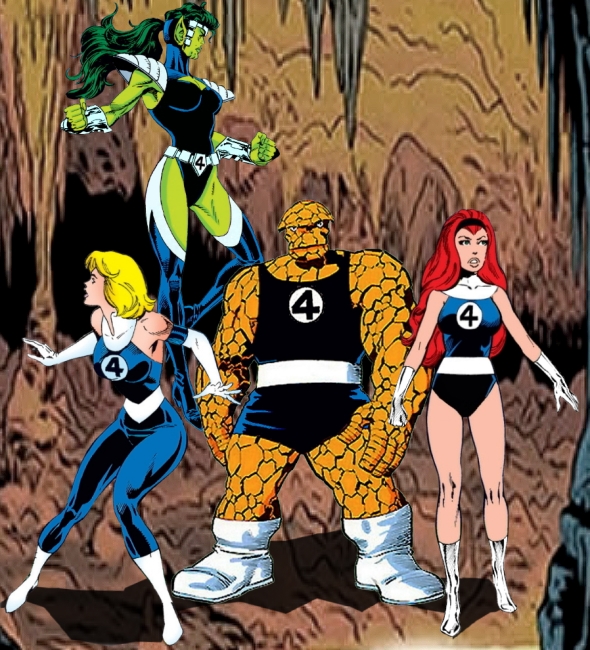 Now, why isn't Reed on the Fantastic Four? Shortly before the Formation of the new Fantastic Four (see above), Reed and the others learned of two severe threats to the universe that required immediate attention. So, the Fantastic Four called out their former members and allies for help....

Four Futurians
Two-Gun Kid, Ms. Marvel, Huntara, Doom II (Kristoff)
The TVA (Time Variance Authority) alerted the Fantastic Four that someone close to them was tampering with the time-stream. The most likeliest culprit is Nathaniel Richards. The FF assemble a team to follow him through time and other dimensions, to hunt him down and undo any changes to the timestream that he makes. Huntara and Kristoff both volunteered to chase after the man who fathered them... or rather a version of that man, and Ms. Marvel is looking for a purpose. For a team leader, She-Hulk suggested her pal Two-Gun Kid, who was recently released from the TVA's holding facility and has since become a bounty hunter in the present day. A barbarian warrior, a man looking like a medieval knight, a cowboy and a modern day woman... there's no threat they can't face together. The Futurians operate out of the Richards Family home in California that has it's own time-machine in a lab.
(To perfectly blend in with any era they visit, I needed all four characters to be human looking so they can Dress up as regular people from the places they visit - though Doom will protest having to let go of his armor. Initially this was supposed to be just a cross-dimensional travellers team, spearheaded by Huntara due to her power, and then I picked Doom for his intellect and their shared relation to Nathaniel. I was gonna round this up with the otherworldly Thundra and adventure seeking Wyatt Wingfoot, who'd have his hands full with keeping the other three in check.) 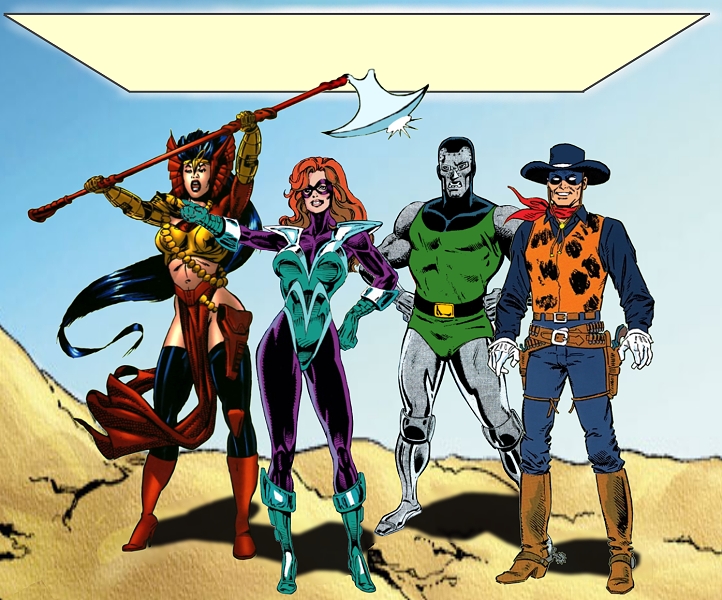 Protectors of Positivity
Mr. Fantastic, Karnak, Triton, She-Hulk
Apparently Annihilus managed to trap Galactus in the Negative Zone, where he was forced to consume an anti-matter planet. The results were... explosive. Galactus barely survived and made it back to regular space, but the fabric of reality has been harmed. There's now numerous ruptures in the barrier that keeps the Negative Zone and regular space apart, and if these rifts widen and more and more matter/anti-matter seeps through, all of creation will die. Reed handpicked a team to travel to the Negative Zone, to help him find and repair these cracks. Karnak is there because he can sense flaws, so he can "see" even the tiniest fissures in the barrier, Triton is there for his navigational skills in the Negative Zone, which is a similar experience as diving in deep space (established way back in FF #62) and She-Hulk is there to help fight off the many villains of the Negative Zone and because some cracks might be located in areas with high radiation levels that she is immune to. Reed's costume is the result of a prank Franklin pulled on him while they said their goodbyes before departing into the Negative Zone.
(First idea for this slot was a Teaching Academy where Sue or Ben and a few others would be in charge of training the next generation of heroes. With them both taken, I picked Reed and wanted to go for a scientific Think Tank with Bruce Banner, Valeria and wildcard Amadeus Cho. Yet, then the Hulk was grabbed, so I adapted to this Negative Zone approach using both Triton and Karnak) Thanks Magik, the 4 Nations was my first idea and IMO also the best looking of my four concepts.

Anna's explanation for his four teams also was interesting. I admit, when I saw the line-up of Thing, Hulk, Dragon Man and She-Thing, I assumed that it was a group stationed on Monster Island ruling Mole Man's kingdom in his absence.

All in all, I think this turned out very good for an experiment. Thanks for letting me do this, and thanks to all who participated. It was quite a surprise at how fast we paced through this. I had thought it would take about two to three weeks, with 3-4 days per round, but everyone was so disciplined that we concluded all five rounds within a single week. It was a nice change from a regular draft where you sometimes have to wait and watch from the sidelines for almost two weeks before it's your turn(s) again, and I hope that we might be doing the occasional speed draft in the future.
[PL_2.0]
Top

Yeah, I was shocked with how fast we blazed through that draft, especially for it being mostly 4 picks per person.
"Sometimes I do feel like I'm a failure. Like there's no hope for me. But even so, I'm not gonna give up. Ever!" -Izuku Midoriya
Top
Post Reply
63 posts