Where Creativity and Comics Collide, The main hangout to talk anything and everything to do with UnCanon.com!
Post Reply
218 posts

This was today's fairly quick drawing and inks - maybe practise for drawing Black Panther ahead of a team shot? (Not really, it was just next on the list of tutorials). Quite a bit of brushed inks on this, but even so much more pleased with this than the prior drawing Right, good proportions of the head, and this nose is proof that sometimes less is more.

Re: Thanos/cube
The Energy crackle was too clean/perfectly bordered for my taste, would have liked to see some smaller bubbles breaks the cycle. And Thanos' head was a bit small.

Side-Note:
I started to do another drawing. It's a certain Irish X-Man.This time it's the right size as the entire body will fit on the sheet, and now know that this will not remain a b&w pencil drawing but get digital inks and coloring, I'm not that afraid to make mistakes so 'm working faster than with Aurora. Both arms, torso and one (bent) leg already done, head and the other leg still need to be completed.
[PL_2.0]
Top

Completely agree on the head size of Thanos, it's definitely too small. Yeah there's another way of doing the Crackle which is essentially having it erupting from the point of source which would've been interesting to try and might also added a little spontaneity. Maybe something to look at on a future drawing. It's funny I do want to learn the "classic" way of illustrating energy / power sigs / FX but I'm not sure if digital illustration makes some of these a little obsolete with what's available in digital tools.
Like the lightning bolts and rain for Thor and Storm were custom brushes that can be painted in that's so much a) easier and b) visually more interesting.

Okay, one advantage of drawing in smaller size - I found it easier to draw body parts. A lot of turns I could do just by rotating my writst without moving the entire Hand. A disadvantage is having to draw such a small face, you basically have to get it right in one go, that is if you use a standard eraser like i do, which is too big for erasing just one tiny facial element. First picture is how far I got yesterday - with the Aurora drawing underneath to show the difference in size. Second picture is what I believe to be the finished pencils. I want to try and digitally work in a semi-transparent energy signature for the scream. Sorry for the bad resolution and blurriness, tomorrow I'll try to make a high-contrast photcopy and scan if I find the time to go to the store. Banshee looks fantastic - I know what you mean regarding facial details - it's a continued hindrance I struggle with! Great job on the hair in particular.

Thanks. I also think that the fist sizes are slightly off, the right one should be a little bigger and the left one a bit smaller. I'll try to work on that and the forearms while "inking". The drawing part was fun and very relaxed this time, there was about 30-60 minutes that I was completely "spaced out" listening to music while comparing source image and drawing and then marking each dark area one by one. The image is based on a Terry Austin drawing on an inside cover of Classic X-Men.

Once again, I'm surpised by the magic of that copy shop down my block. First I tried xeroxing this at work with the darkest setting the machine has to offer, but the image was only partially visible. But the professional at the score used this really high contrast and darkness setting, and you can even see some of my pencil strokes. And the good part, he charged only 20 cents for copying and scanning. (I gave him more though) 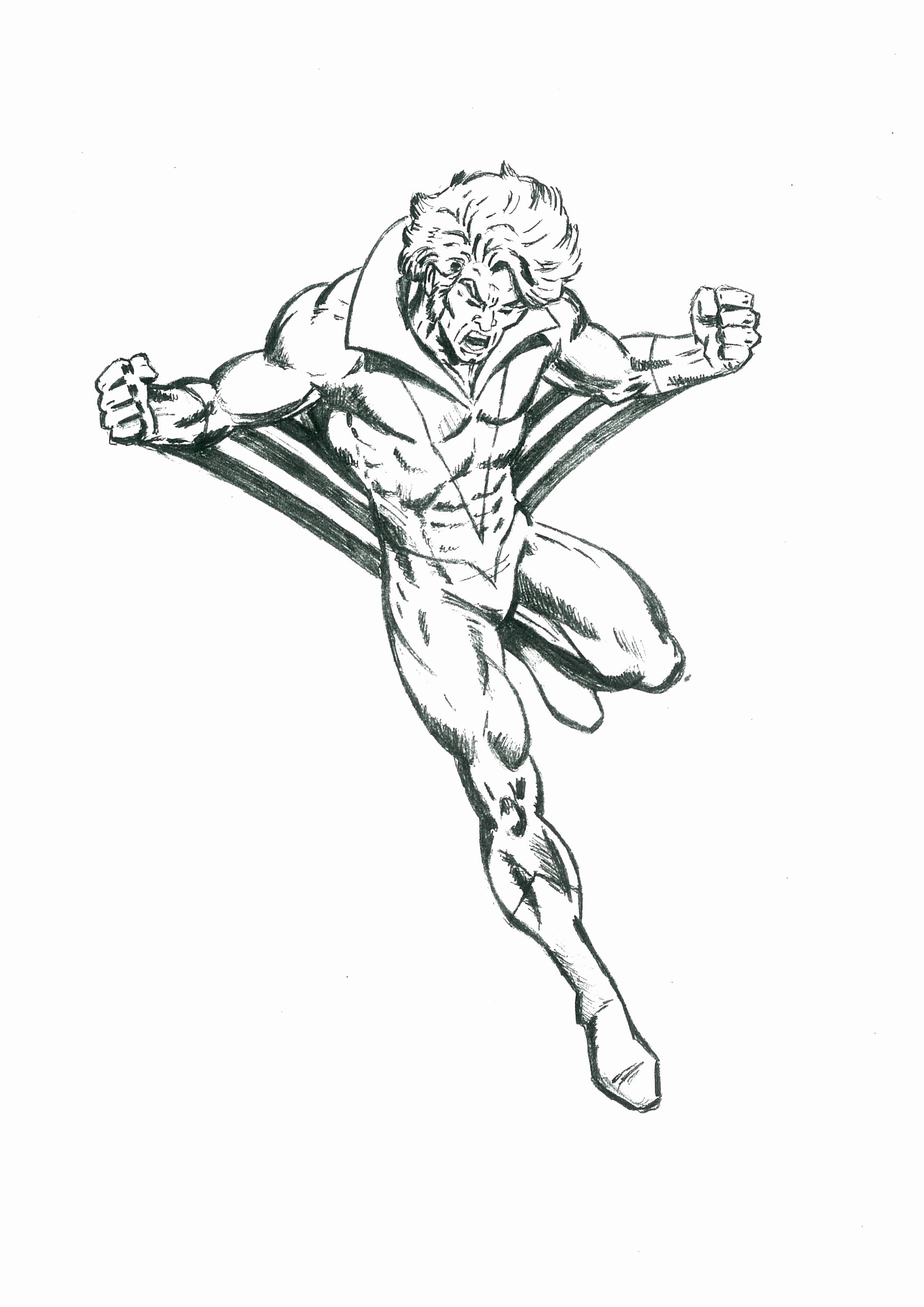 Yeah, I think when you're 'in the zone' when doing any sort of art piece, time just can disappear.

It's a really nice effect (to me) to see the pencil lines. I remember years ago when Wolverine Origin (the Jenkins/ Kubert / Isanove series rather than the post HOM ongoing) was first released I was astounded at the art and seeing the pencil definitions coming through the colours without any inking, I hadn't really seen that before and whilst it's now much, much more common, to blew my mind to see such a deep feel to the illustrations. I know you went with a more retro art style for Aurora but you might want to try to pull some of those pencils into the coloured version.

Here's BP coloured - bit of a rush job but I thought it was one that I could do a job with even with the somewhat rough inks. This is this morning's drawing, I think Iron Fist's right hand is a little small so I might digitally up the size a little. Think I'm going to digitally ink this only as I kinda want to progress the idea of using minimal inks and letting pencils do the rest. I'll see how it works out. EDIT: Here's Iron Fist coloured, with a background added - I'm still working out what works best on minimal inking vs traditional block inking - on darks, like on BP, the block inking looks much stronger but it doesn't look as good on light colours, so maybe I need to make a call on each drawing as to what areas will only get a light outline vs more heavier inking, as I think the greens lost out a little on a lack of dark inks. Today's drawing was an attempt to right some of the wrongs in the last Thanos drawing, by drawing a cosmic villain with quite a bit of details... I was much more patient with this and I think it shows...not sure if I'll bother colouring it yet or not, but I think it's a fairly decent attempt at hand inks.

I can't take any credit for that unfortunately.

A quick Google search for "dojo", some depth of field blurs, and some shadows applied to the floor is all I did with the background. Looking at it I could probably have replicated it entirely with line art and gradients but that would be reinventing the wheel.
X-Editorial:viewtopic.php?f=13&t=8412&p=177877#p177877
Thunderbolts:viewtopic.php?f=14&t=8802&p=186403#p186403
Top

It's been a while since I shared anything on this thread, and I've not really been in the right mindset to share anything other than as the draft covers, but here's another pencil drawing of Herc. And here is Hercules inked... It has been a while since I've shared anything, but still drawing away through tutorials just not as frequently, but I thought I'd share my most recent drawing of Nick Fury, as it's a bit more like a panel or action scene which was quite fun, sure the legs are a little off and his right arm is a bit small but there's an energy to it that feels a bit more classic comics. I think it's much harder to draw an action scene rather than a single character pose but it avoids that slightly stilted/artificial look to a still shot that makes it come alive a bit. This is today's drawing of the Scarlet Witch- it's not perfect, but I'm quite pleased with this for a much looser / rougher style of pencils. I think I'm going to go straight into digital colours on this one. And here's Wanda in colours: It's been AGES since I've updated this thread, but this is the latest thing I've been working on over the last couple of weeks. Still inspired by this draft, here's my token attempt at going for a more painted style like some of the old Annihilation covers rather than the ink and colours approach of my last couple.