The Chilling Adventures of Sabrina

Did you see the Dr. Strange Movie from the 70's? Me neither, but I'm sure someone did. Come here to talk about Movies and TV
Post Reply
44 posts

I watched the Yule Holiday episode last night and it gave me a good fix. I immediately thought of this thread - and the timeline discussion - when we received notification of events happening in "yesteryear." I think the murkiness of the setting is quite pleasing. I really enjoyed this episode, although it felt as if it was crafted not to have as much impact on the events of the show all together, and in that it served it's purpose. Yes, Zelda makes an important decision regarding the stolen baby, but at the end of the episode the status quo hasn't changed, only now we know what the plan is which could just as easily been the plan from the season end finale.

Sabrina's decision making needs to be addressed though. She warned plenty of times about the dangers of conducting a seance but chooses to proceed anyway and worse, informs Madame Satan of her plans allowing her to put them in peril. This reoccurring offense in the plot is becoming boring and worse, makes me dislike Sabrina somewhat. Her reasoning for the seance is half-hearted as first it revolves around retrieving her mother from Limbo but also is about how to deal with her boyfriend. I was pleased the Weird Sisters were both helpful and pleasant this episode. This muddy motivation made us lose some character beats and emotion that otherwise would have made me cry watching a scene between a child and a lost parent.

The subplots of the episode around the demon, the lost children, and Gryla were well executed and fun.
Top

Here’s the thing— there’s lots of nods to actual witchcraft in this series and specifically this episode in the trial with the baby. Sabrina’s mother’s trial was one used by King Solomon in the Bible, but there are also texts referring to demonology that were supposedly written by— you guessed it— King Solomon. This was a nice little nod to that to show that the writers are actually doing their homework.

Anyway, I agree with Sabrina’s decision making process to an extent, but looking at this episode through the lens of everything that happened in the season finale... of COURSE Sabrina’s going to think she can pull off a seance. She already knows that she’s one of four witches who can summon hellfire, and for a girl who is still relatively new to her powers, that’s going to give her a bit of arrogance. I do feel like we need to see more consequences of her devil may care (pun absolutely intended) attitude to using magic, but if she can summon her boyfriend’s dead brother back to life and mess it up so spectacularly that the only ACTUAL consequence that she cares about is that she and Harvey have split up? Someone she actually cares about is going to have to get hurt or killed in order for her to learn this lesson, I feel.

Harvey’s rejection of magic was quite heartfelt and a powerful scene, I feel, because he isn’t JUST rejecting the presence of magic in his life, he’s also rejecting Sabrina at the same time. Perhaps the actor just isn’t strong enough to pull off very emotional scenes or whatever, but this didn’t feel like it had the gravitas that it deserved.

Ros is bae. Still. For now and forever. I do hope that her cunning visions end up pitting her against Sabrina and the Spellmans at some point, because otherwise her “I had a vision” plot beat is going to get quite old quite quick.

I also think it’s worth mentioning that while it’s not ever really made into a huge plot point, it really does seem like the Spellmans are more important to the magical world than we’re seeing at the moment. They have resurrecting soil on their land, they’re held in high trust by the seniors of the Church of the Night, and they seem to be incredibly powerful witches in their own right. I hope this is building to Hilda making a power play for the leadership of the Church.
ASPIRING WRITERS!


Spoiler: show
Suzie is now going by the name Theo. This is a really bold choice and I’m 100% here for positive trans representation

Nobody knows whether the new CAOS episodes are season 2 or still season 1. Is the next group going to be called “CAOS part three” or “CAOS season two part one”?
I'm almost clever! https://mattthecatania.wordpress.com/
Top

Despite the lousy Solstice episode & messy finale, I enjoyed this better than first crop. Its theology, however, remains frustrating. There is horror & tragedy in the road to (literal) Hell being paved with good intent (that may actually be magic this time), but it’s unclear if that’s what the series is aiming for. It would’ve worked better if Edward Spellman had been the villain like in the comics.
https://mattthecatania.wordpress.com/20 ... ore-slump/ 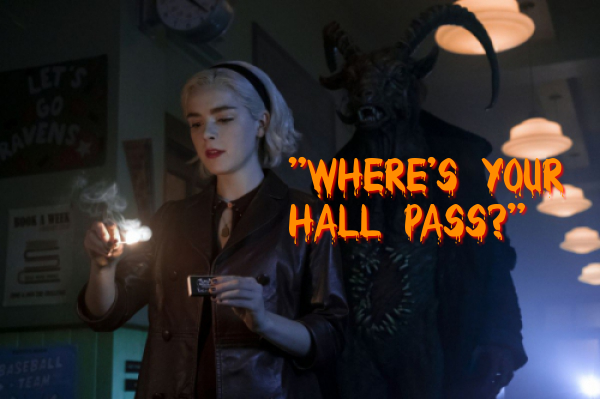 I'm only two episodes in to the second season but I am enjoying it. I like the darker, grittier Sabrina and I think her motivations are understandable. She really could have avoided the whole second episode by simply stealing the pack of gum or another though shortly after getting "busted" for the first. The standout scene though so far has to be Ms. Wardwell's pained reaction to watching the play re-enacting Lilith's encounter with the Dark Lord. I was absolutely enthralled. I'm also happy to see that Zelda is coming across more competent than last season and I absolutely adored when Hilda scolded Sabrina with, "Excuse me, Miss? YOU go to bed!" I am tucking that one away for my own children.

I don't love the Harry and Roz subplot and initially assumed her vision related to their scene and would be a misinterpretation, but that doesn't seem to be the case. In hindsight, her visions, while not always literal as this one seems to be don't suffer from misinterpretation. However, it makes good room for the Nick and Sabrina relationship, which I am shipping. I also was to cosign that seeing Prudence and Sabrina join forces in a tepid alliance is fun. Prudence is too smart to continue to see Sabrina as anything but an ally.
Top

Part three is like watching a trainwreck in slow motion because you know it’s going to careen off the rails yet still takes too long to do so. I put way more thought into the supernatural worldbuilding than its writers did!
https://mattthecatania.wordpress.com/20 ... ic-muddle/

I disagree, EMP. I think the only thing the producers and writers need to work on is the pacing of the middle sections of each season where they fall flat.
ASPIRING WRITERS!

I agree with Das, I enjoyed this season. My main issue was the fact that it was the shortest and there were a lot of subplots going on.
Everybody is entitled you their opinion...but yours is wrong.
Top

Gremlin wrote: ↑
31 Jan 2020, 16:28
I agree with Das, I enjoyed this season. My main issue was the fact that it was the shortest and there were a lot of subplots going on.

I think my favourite thing about this season was how well they portrayed Sabrina going from so arrogantly confident to so incredibly shaken, and the same goes for Zelda to be honest. Hilda remains the absolute loveable favourite for me out of the Spellmans, and while I feel like Ambrose was almost reduced to a role of expositionary dialogue deliverer, I really enjoyed his and Prudence’s relatuonahip this season as I feel it really helped to ground Prudence’s character as something more than “generic pretty bitch” trope. Also Hilda gets another stone cold moment in the finale and I LIVE for her when she delivers those scenes, the actor playing her has a real talent for being comedic relief, so it’s really something special when she goes dark. She defends, she attacks, and she brings you a snack. YES HILDA.

I can only assume that with the season being so short that it’s either due to a larger budget required for special effects and set pieces, or because they’re going to aim to continue the “two parts every six months” that they’ve been achieving so far, and I’m okay with that, as long as they actually balance character beats and plot points better in the future.
ASPIRING WRITERS!

I liked this. Agree with das, 2 Michelle Gomez's is a treat, though she wasn't on screen near enough. Hilda is indeed the best. I'm liking Prudence, tho I wish she had more to do.

That said, I continue to really dislike Sabrina, and I think Shipka is just a terrible actress. She delivers everything like a uppity rich kid who went to "ACTING" school and I just can't stand her on screen. Also, one of my coworkers went to school with her growing up and their parents are friends and go to country club together (barf) and so I've heard lots of things that give me confirmation bias against her, so that doesn't help.

One thing that annoys me with this show, though, especially this season, is how dumb they write the characters, especially Sabrina. Like they have no idea of the consequences of their actions EVER.

That said, Blackwood is hot and I like him. Hilda, Zelda, Prudence, Harvey, and Roz continue to be my favorites. The villains were fun this season, if underutilized. All in all, still a campy delight.
Top
Post Reply
44 posts