Did you see the Dr. Strange Movie from the 70's? Me neither, but I'm sure someone did. Come here to talk about Movies and TV
Post Reply
530 posts

I’m so disappointed Eva McCulloch, the new Mirror Master, doesn’t have a Scottish brogue. Or are we calling her Mirror Mistress?
I'm almost clever! https://mattthecatania.wordpress.com/
Top

I'm not sure Jesse is as dead as we think. I have a feeling that Nash had his own "Jesse", but she looked like Allegra and that's what the whole Harry-ghost, picture, and journal are about.
Top

Mirror Iris is more interesting than regular Iris and I'm assuming that Mirror Lady, who's name I'll never remember, has beef against her husband. I do wish Team Flash could meet someone that doesn't turn out to be lying and manipulating them though. It's basically been a plot point in nearly every season. Wells/Thawn, Jay/Solomon, Julian/Alchemy, I don't remember S4, and then Nora would count for S5 considering she was working with Reverse Flash.
"Sometimes I do feel like I'm a failure. Like there's no hope for me. But even so, I'm not gonna give up. Ever!" -Izuku Midoriya
Top

I’m so disappointed Eva McCulloch, the new Mirror Master, doesn’t have a Scottish brogue. Or are we calling her Mirror Mistress?
Are we going to find out what Flash did to Pied Piper in Post-Crisis continuity?
I'm almost clever! https://mattthecatania.wordpress.com/
Top

When Grodd & Barry merged in the astral plane prison in “Grodd Friended Me,” I hoped Grodd would get the full Flash costume as a JLApe nod. Hopefully gorillafication of superheroes will be the subject of the next Beeboverse crossover!
https://mattthecatania.wordpress.com/20 ... lla-grodd/

The “finale” was one of the best of the season, so it’s frustrating it halts here just as the momentum crescendos.
https://mattthecatania.wordpress.com/20 ... nish-line/ 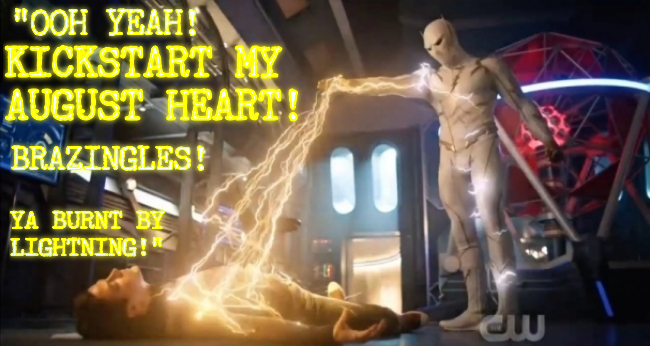 I don’t blame him directly, I blame media for their carelessly handling and presentation of child abuse, rape, racism, etc.

Sure, he could have known better, but if you look at sitcoms, modern cartoons, etc., this is the stuff people grow up with nowadays. South Park, American Dad, Family Guy, Paradise P.D.,.... those shows constantly make fun of negative things and no one says a word. Because TV shows are super cool and represent nowadays society.

But the producers never really care about how much people let themselves be influenced by what they see and hear.

I don’t think he meant what he said, he can’t be that stupid. He wrote jokes you can hear on a daily basis on tv. And people lea4n from watching tv and think they can be as funny as Peter Griffin or be vulgar as Cartman.


So in my opinion, it’s the TV and production companies where blame should be put.
Top

As a side note, what is with the apparent hatred Flash fans on twitter have for Danielle Panabaker? They claim she hates Candice Patton and wants to be the female lead, but all of the evidence I saw was a huge stretch.
Top

If I was her I'd be a little frustrated too, because I don't have any clue what they are doing with her character vis a vis Killer Frost/Caitlin. But I hadn't heard anything bout her being a problem on the set or anything. I don't follow that stuff much though.
Savage Avengers Draft: She-Hulk | Elektra | Echo | Gamora | Rogue | Chun Li | White Widow | Shuri
Top


Welp...
So on one hand we have the existence of a being who can reset the entire timeline, destroying everything…, and on the other hand we have a few mind wipes and some gaslighting. You're right, totally evenly weighted.
-Cly
Top

So I’m bingeing this during lockdown...

I like it a lot better than Arrow, and actually? I think I might prefer it to Supergirl too. I’m up to episode 10 of season 5, and other than several repeated plot beats, I do think that the characters are more likeable than in the rest of this extended universe.

Disappointed to see the news about the actor who played Elongated Man... I think he helps to keep things a lot lighter in tone and despite starting off as a character that I didn’t rate at all, he’s grown on me a lot.

Amunet Black is certainly a favourite of mine despite her terrible English accent, I much prefer Killer Frost as a character to Caitlin, Iris is pretty great, as is Joe. I really liked Kid Flash and Cecelia is awesome. Not sure how I feel about Nora as a character but the actor is pretty great. Barry... ugh. I fluctuate between thinking he’s great and thinking he’s terrible.

Wells and Cisco are the absolute best, however.
Sinister’s Lab now secretly altering other player’s posts in the RPG section
Top

Anna Raven wrote: ↑
09 Jun 2020, 13:33
If I was her I'd be a little frustrated too, because I don't have any clue what they are doing with her character vis a vis Killer Frost/Caitlin. But I hadn't heard anything bout her being a problem on the set or anything. I don't follow that stuff much though.

Yeah, the first I saw of it was in the replies on twitter yesterday when the news about Ralph broke. It seems mostly to be that she has supposedly pushed other relationships for Barry, with both herself and Patty Spivot. It all seemed pretty innocent to me, just somebody trying to drum up interest in her show.
Top


Since shapeshifting is one of Elongated Man’s established powers,recasting him should be less of an issue than usual. What if Cory Michael Smith was available for replacement Ralph Dibny?
I'm almost clever! https://mattthecatania.wordpress.com/
Top

Don't forget about Allegra! And yeah, recasting the character is no big deal. Say in the season premiere that his secret identity was somehow revealed, so he had to use his powers to assume a new civilian identity.
Top

The Flash is back but not in a flashback!
https://mattthecatania.wordpress.com/20 ... n-a-flash/
She's not in this episode, but I now have a greater respect for Ultraviolet. 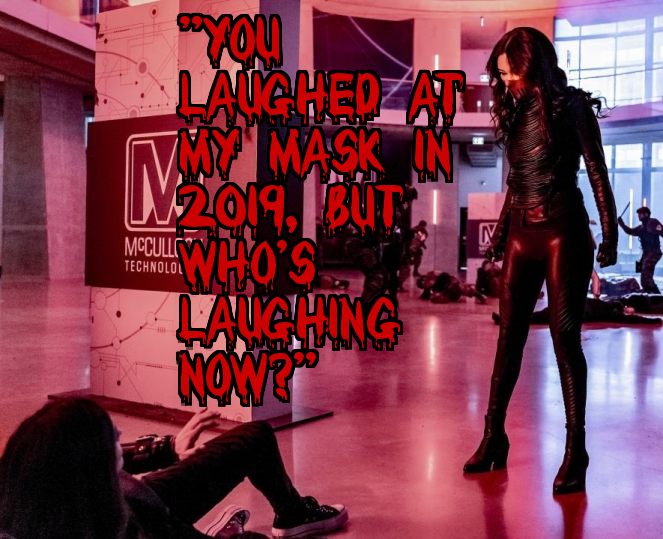 Well. I wasn't prepared for that.
Top

So how does The Flash wrap up season six in season seven?
https://mattthecatania.wordpress.com/20 ... th-season/

Instead of Mirror Master or Mirror Mistress, Eva “not a true Scotswoman” McCulloch opts to dub herself Mirror Monarch just to spite my running gag. Would Reflection Ruler be more precise?
I'm almost clever! https://mattthecatania.wordpress.com/
Top

It’s a widely held theory that The Flash could reach the heights of its early years again if it didn’t have so many episodes per season. It turns out this is only true if the scripts selected to be produced are of its best quality to begin with.
https://mattthecatania.wordpress.com/20 ... -on-fumes/

Your title says "Is the Flash is running on fumes?"
"Sometimes I do feel like I'm a failure. Like there's no hope for me. But even so, I'm not gonna give up. Ever!" -Izuku Midoriya
Top

Thank you for pointing out the obvious typo that I have since corrected.
I'm almost clever! https://mattthecatania.wordpress.com/
Top
Post Reply
530 posts